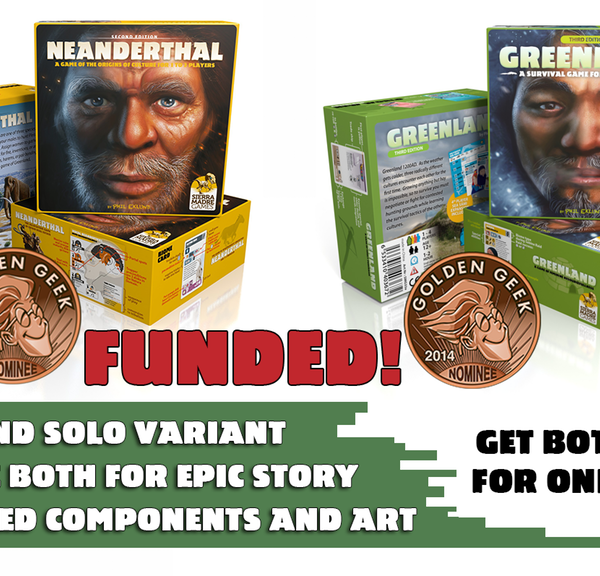 It’s 43,000 BC in Ice Age Europe, the dawn of modern man. In Neanderthal, you are one of three human species: Archaic, Neanderthal, or Cro-Magnon. Assign your males to hunt Pleistocene megafauna, but try to avoid being eaten by predators. Assign your women for teaching your children vocabulary, leading to cognitive fluidity in the next generation and to a tribalistic culture. Specialize your elders for fire, war, big game, inventions, or animal domestications. Choose between three mating strategies: promiscuous, harems, or pair bonding. Victory depends on which strategy you choose, and may include your hunters, elders, women, vocabulary, trophies, inventions, or domesticated animals.

At this point, the players have developed to the point where the companion game Greenland begins, so you can flow one game into another seamlessly.

The three players in Greenland represent the Norse (red), Tunit (green), and Thule (yellow) tribes inhabiting Greenland from the 11th to the 15th centuries.

As a tribe, you attempt to secure food, resources, and technology to increase the size of your tribe and support children, elders, and livestock while also wiping out competing species or gathering resources to collect victory points. You must work around the weather and the extinction of natural resources as well as negotiate deals to protect your wives while you decide between monotheism or polytheism. In this tableau-building game, you’ll send your population out to hunt native species of Greenland — but some might not come back. (Historically, the climate turned frigid and all but the Thule (Inuit) died out.)